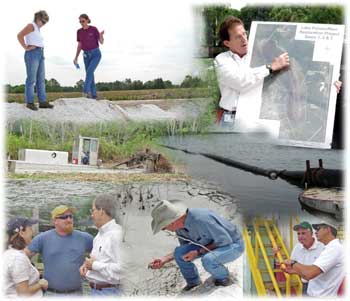 The Lake Panasoffkee restoration project involves dredging approximately 8.2 million cubic yards of sediment from the lake, which will improve fish habitat, restore the historic lake shoreline and improve navigation. The project will also restore approximately 920 acres of open-water habitat that has been lost since the 1940s to the encroachment of dense emergent vegetation. Lake Panasoffkee is designated as an Outstanding Florida Water by the Florida Department of Environmental Protection and is one of the District’s Surface Water Improvement and Management (SWIM) priority water bodies.

Basin Board member Jack Dennis says the completion of Step 1, which restored approximately 25 acres near Coleman Landing, and the work that has been completed as part of Step 2, have made a difference. “You can really see the improvement from before the project started to now,” said Dennis.

There have been a few challenges associated with Step 2 thus far. The dense emergent vegetation around the residents’ docks has slowed down the contractor’s progress. These challenges have put the project behind schedule, but Mike Holtkamp, District project manager, says that once the contractor gets finished with the western shoreline and starts dredging in the open-water areas of the lake, production will increase dramatically and the contractor should be able to get back on schedule.

Another adjustment to bring things back up to speed is the addition of a piece of equipment called a cookie cutter, which is a boat with a cutter mounted on the front that acts like a giant aquatic lawn mower or “weed eater.” The cookie cutter pulverizes the dense emergent vegetation and tussocks, making it much easier to dredge. In May, the contractor also installed a larger cutterhead to the dredge, which will improve the production.

Once the material is dredged from the lake, it is piped to the spoil site off County Road 482 South, immediately west of Interstate 75.

Visitors to the spoil site see mounds and mounds of shells. The shells are the remnants of a type of freshwater snail that used to be abundant in the lake. The disappearance of the snails indicates that something changed in the lake, but scientists have not been able to determine the cause.

Lizanne Garcia, SWIM program manager, says that while the settling ponds are used for dredge disposal, it is also functioning as a wetland due to the growth of bulrush and other desirable plants growing there. Bullrush is a desirable plant because birds feed on it.

The total cost of the four-step restoration plan is approximately $26 million.

From 1999 through its 2005 budget, the state Legislature has appropriated a total of $19.07 million to implement the restoration plan recommended by the Lake Panasoffkee Restoration Council. The District’s Withlacoochee River Basin Board and SWIM Program budgeted $2.55 million to the project from 1999 to 2004. The District also secured $469,733 from the Florida Department of Transportation, $1.10 million through federal appropriations and $2 million from the Florida Fish and Wildlife Conservation Commission. Steps 2 and 3 of the restoration plan, which represent the full-scale, in-lake restoration effort for the lake, are fully funded. Sumter County is the lead agency in the implementation of Step 4 of the restoration plan, which is the maintenance dredging and clean out of the residential canals along the lake’s western shoreline.

District Takes to the Air to Treat Hydrilla on Lake Panasoffkee