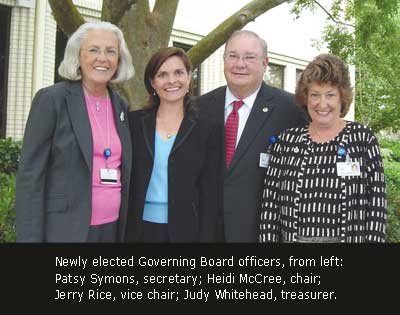 Heidi B. McCree was selected during the spring election by unanimous vote as the first female Governing Board chair in the 44-year history of the Southwest Florida Water Management District.

“I want to thank the Board for this honor and look forward to carrying on an important legacy,” McCree said. “We have achieved great things in west-central Florida, but there are many challenges yet to face to ensure an environmentally sustainable water resource. The keys will be maintaining our focus, working cooperatively and relying on science to find regional solutions to regional problems. With our strong Board and hard-working staff, I am confident we can meet those challenges.”

CHAIR MCCREE
McCree of Tampa was appointed to the Governing Board in September 2000 and elected secretary at the April 2002 Board meeting. She was elected as the Board’s vice chair in May 2004. Her Governing Board term expires March 1, 2008.

McCree served for four years as the executive director of the Hillsborough River Greenways Task Force. Her prior experience includes working for the Florida Department of Environmental Protection and for two governors of Maryland in their Chesapeake Bay and Save Our Streams programs.

VICE CHAIR RICE
Rice of Dade City was appointed to the Governing Board in March 2003 and was elected the Board’s treasurer in May 2004. His Governing Board term expires March 1, 2007.

Rice is self-employed in real estate sales and marketing, consulting and cattle ranching.

Symons is the owner-operator of a citrus and cattle operation in DeSoto County.

TREASURER WHITEHEAD
Whitehead of Brooksville was appointed to the Governing Board in March 2003. She had served as a member of the District’s Coastal Rivers Basin Board since March 2001. In May 2004, she was elected as the Board’s secretary. Her Governing Board term expires March 1, 2007.

Whitehead is the owner of Residential Appraisal Service.

Governing Board members are unpaid, citizen volunteers who are appointed by the governor for a four-year term and confirmed by the Florida Senate. The 11-member Governing Board sets policy for the District, whose mission is to manage the water and related resources of west-central Florida to meet the needs of current and future water users while protecting the environment.

District Takes to the Air to Treat Hydrilla on Lake Panasoffkee