Go With the Flow

Water Management on the Move 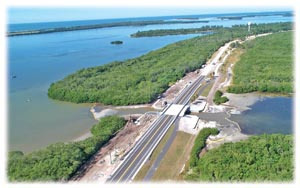 A cooperative project between Pinellas County and the District has restored the natural flow of water between two back bays at Fort DeSoto Park near the mouth of Tampa Bay. Restoring the circulation will help improve water quality and habitats in the estuary.

When the park was being developed during the late 1950s and early 1960s, a dredge-and-fill project connected a series of small mangrove islands from the mainland to a barrier island. This causeway allowed visitors better access to the Fort DeSoto beaches, but it cut off the flows in the back bays and caused impaired water quality and a loss of seagrass.

The District’s project manager, Paul Miselis, says the new 40-foot bridge, built over an area that was historically open water, is expected to increase the exchange of water between two relatively stagnant back bays.

“The water in the back bays just got too hot for too long to sustain seagrass,” said Miselis. “But the improved circulation is expected to improve water quality, which will lead to larger, more productive seagrass beds.”

Stormwater runoff from the new sections of roadway is also receiving water quality treatment before it is discharged into the bay.

Scientists and engineers involved with the project recently tested the natural flow by adding a non-toxic fluorescent dye to the water to monitor the tidal movement. Additional water quality and habitat monitoring programs are underway.

The project, which is a cooperative effort among Pinellas County, the District’s Pinellas-Anclote River Basin Board and the District’s Surface Water Improvement and Management (SWIM) program, cost approximately $1.6 million to complete. Fort DeSoto Park is located in Tampa Bay, and restoring Tampa Bay is the top priority for the District’s SWIM program. Six other agencies, including the U.S. Fish and Wildlife Service, U.S. Department of Commerce, National Oceanic and Atmospheric Administration, U.S. Environmental Protection Agency Gulf of Mexico Program, Pinellas County Environmental Fund and the Florida Department of Transportation, also contributed to the project.

“The project is unique because it allows the nearly 2 million people who visit the park each year a first-hand opportunity to view a water quality and habitat improvement project,” said Miselis.

Pinellas County plans to hold a ceremony to celebrate the completion of the project early this year.

District Partners with Wheelin’ Sportsmen for a Special Hunt

Go With the Flow

Employees Reach Out to Others