The Problem With Lake Persimmon... Air it Out! 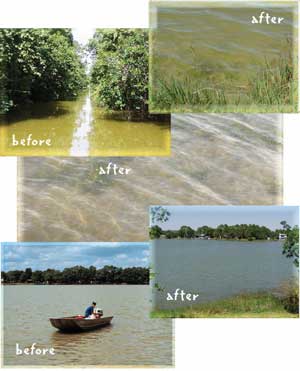 A simple solution seems to be the temporary answer to Lake Persimmon’s poor water quality.

A study in 2000 showed that the Highlands County lake experiences continual blooms of blue-green algae and long periods of anoxia at the bottom and middle depths of the lake. Anoxia is the lack of oxygen resulting from dense algae in the lake. The algae blocks light penetration below the surface, inhibiting growth of desirable plants and causing the lake to separate into different temperature layers. The layers include a warm layer on the surface and a cold layer on the bottom, which is dark and depleted of oxygen. In Lake Persimmon, the anoxia is accompanied by a buildup of toxic ammonia and hydrogen sulfide in the water.

“Excess nitrates are brought into the lake by contaminated ground water,” said Keith Kolasa, District project manager on the Lake Persimmon Water Quality Assessment Project. “The primary source of the nitrates is from years of application of fertilizers within citrus groves and residential lawns surrounding the lake.”

“Eleven air diffusers were placed at various points around the bottom of the lake,” said Kolasa. “The air being pumped into the bottom breaks up the anoxic layer and eliminates the vicious cycle of ammonia and hydrogen sulfide production.”

Ending the anoxia in the lake also prevents the release of nutrients from the mucky bottom sediments, which also helps reduce algae growth.

The aeration system was installed in July 2002. Since then, the lake has shown a substantial decrease in ammonia and some sign of water quality improvement, including a reduction in nitrates and blue-green algae.

“Overall, this project has shown that aeration may be used to help improve water quality of other highly degraded lakes with similar anoxic conditions,” said Kolasa. “However, while the aeration project seems to be contributing to the improvements we are seeing, it doesn’t solve the long-term problem, which is an overabundance of nitrates in the watershed.”

The next step to restoring Lake Persimmon will be working with the citrus growers and a nursery in the watershed to ensure that best management practices are used to reduce nitrates.

Two Workshops Set for May