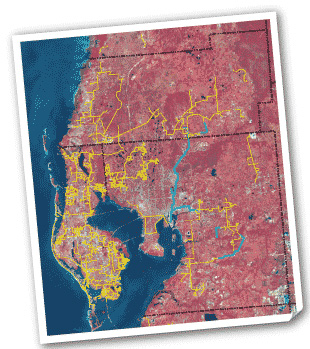 The Tampa Bay area already leads the nation in the reuse of reclaimed water. An innovative new project will make a good system even better, making use of both dry-season and wet-season supplies.

The project will save 26 million gallons per day (mgd) of potable water by utilizing approximately 55 mgd of reclaimed water produced by the city of Tampa’s Howard F. Curren Advanced Wastewater Treatment Plant.

During the wetter months, when irrigation needs are reduced, reclaimed water will be used for two primary purposes:
• To enhance natural systems and aquifer recharge in the upper Hillsborough River watershed
• To augment stream flows

The enhancement component will provide an opportunity to restore impacted wetlands, recharge the aquifer, and increase the base flow of the Hillsborough River.

The project’s augmentation component will provide additional river flow downstream of water withdrawal points, protecting the resource while allowing more water upstream to be withdrawn and treated or stored in a reservoir for potable uses.

The project is estimated to cost approximately $213 million.

WHY DO WE NEED THIS PROJECT?
The tri-county area (Hillsborough, Pasco and Pinellas) is a rapidly growing region of more than 2.5 million people that is faced with significant water resource concerns. The water resources in the Hillsborough, Alafia and Palm River watersheds have been stressed. The watershed of the Hillsborough River, the source of much of the potable water supply for the region, has experienced decreased groundwater and surface water levels over the past few decades. Land-use changes with associated drainage and storage alterations, a regional flood project and extensive ground- and surface-water withdrawals have contributed to increased stresses to the water resources.

Reclaimed water is an alternative source of water that has great potential to help meet future demands in the region, while ensuring the sustainability of environmental resources.

When irrigation needs are low, reclaimed water can potentially be used to augment water resources. For instance, reclaimed water can be used for downstream augmentation in the wet months of the year, allowing upstream fresh water to be withdrawn for storage in the existing off-stream regional reservoir or for treatment now and providing additional potable water to the region.

THE PARTNERSHIP
The Tampa Bay Regional Reclaimed Water and Down-stream Augmentation Project is proposed as a regional partnership of five agencies working cooperatively to maximize the use of reclaimed water resources in the Hillsborough, Alafia, and Palm River watersheds. The project is proposed to help meet future water demands and to enhance natural systems in the tri-county area.

The timeline for completion of the core project is approximately 10 years.

Two Workshops Set for May