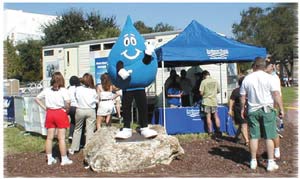 A unique exhibit aimed at getting the word out about water conservation will hit the road again in 2004.

“The water conservation restroom trailer proved to be an effective tool in getting our message out to a wide variety of people,” said Beth Bartos, communications manager for the District.

The District set up the trailer, funded by the Pinellas-Anclote River Basin Board, at five community festivals within the basin last year. Approximately 60,000 people visited the trailer during the 11 days it spent at the festivals.

This year the Hillsborough River, Peace River and Withlacoochee River Basin Boards are also contributing funding to the campaign.

“Due to the very positive response to the exhibit, we are expanding our outreach efforts,” said Melissa Roe, project manager. “The restroom trailer will now go to events in Pinellas, Hillsborough, Marion and Charlotte counties.”

The trailer is already scheduled to appear at the Master Gardener’s Spring Festival in Marion County, the Gasparilla “Piratechnic” Extravaganza and Children’s Parade and the Sant ‘Yago Knight Parade in Hillsborough County. Other events are being scheduled, so look for the trailer at your favorite event!

Most of the people surveyed after visiting the trailer said the exhibit made them more aware of the need to conserve water and that the restroom trailer is a good way to help teach people about water conservation.

Many of the people who used the restroom said they were not aware of the “12 Simple Ways to Save Water” campaign before visiting the trailer and found it “very enlightening and instructional.”

The trailer features air conditioning, six private half baths with water conservation features, running water, lights, mirrors and a bathroom attendant who will keep the stalls clean and stocked.

Although the trailer is an alternative to some bathrooms found at large events, these bathrooms aren’t just about convenience. A water filtration and circulation system for the toilets makes water conservation the main focus. This re-circulation system allows for the water used in the sinks to go down the drains and circulate back to the toilets’ tanks. Once flushed, the toilet water is filtered and chemically treated then returned to the toilets’ tanks. Although state-of-the-art for this event, it’s a system similar to those currently used on airplanes.

What’s in a Name?