Hold Back The Rain 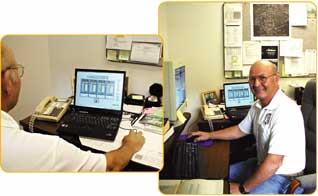 Gene Farley’s days are spent watching and listening for signs of trouble. Farley is the “structures guy,” otherwise known as the Structure Controls Supervisor, at the Southwest Florida Water Management District.

Monitoring and operating the District’s structures is a job that takes a lot of juggling.

“You have to look at all the facts and information available to determine when to keep the water in, and when to let it out,” said Farley.

That means Farley has a lot of information to weigh. Farley keeps an eye on weather forecasts from the National Weather Service, National Oceanic and Atmospheric Administration, and the local forecasters.

The heavy rains and rising water levels since last December have meant extra duty for Farley and the rest of the Operations staff. Water levels rose all summer long. Many areas in June exceeded historic levels, with some locations measuring near 20 inches, or about 40 percent of the area’s normal annual rainfall.

Besides keeping a close watch on multiple forecasts, Farley is also constantly monitoring two computers for the latest readings from hundreds of District Supervisory Control and Data Acquisition (SCADA) sensors. These sensors monitor everything from rainfall to high water limits, and rising and falling rates of the water at a specific area.

Farley is not only armed with data, he is alerted by alarms that page or telephone him if something is out of the normal pre-set range. For instance, on Sunday, Aug. 24 at 10:08 p.m. Farley received an alarm on his pager from a sensor at the Medard Reservoir outflow. The alarm indicated the rising rate of the water. Farley went online to see what caused the alarm and determine where to go from there.

“The area received an inch-and-a-half of rain within an hour so the rising rate went up quickly but the lake level was still within normal range so the structure was not opened,” said Farley.

Many of the District’s structures Farley monitors can be operated from his office or home via computer. All he has to do is dial up the structure and enter the operating instructions; everything is fully automated so no one has to go out to the site and operate these structures in person.

Seventeen key structures that see a lot of action are currently automated, including all of the structures on the Tampa By-Pass Canal. The canal is the District’s largest flood control facility, constructed by the U.S. Army Corps of Engineers and the District in the early 1970s. The canal is used to route floodwaters from the Hillsborough River around Tampa and Temple Terrace into Tampa Bay.

“The structures on the Tampa Bypass Canal do not normally need to be operated,” said Farley, “but since June, the District has provided flood protection to the cities of Tampa and Temple Terrace by moving billions of gallons of water through the canal.”

The main period in which the canal was operated was about three weeks in June with peak discharges of 2.1 billion gallons of water per day being diverted from the Hillsborough River. The canal can discharge as much as 17.2 billion gallons per day. The canal was also in partial operation from mid-August until the end of the month.

“We also have to coordinate the operation of the canal structures with Tampa Bay Water and the City of Tampa because they use water from the Hillsborough River and the canal for public supply,” said Farley.

Several more structures are scheduled to become automated, including the S-353 structure. This structure is a flood control structure operated in combination with the releases of overflow water from several smaller structures in the area in the Tsala Apopka Chain of Lakes. The purpose of the structure is to provide flood control for those residents living on the Tsala Apopka Chain of Lakes. The operation of the structure is complicated by the existence of a downstream Citrus County community known as Arrowhead. The community is a flood-prone subdivision located on the banks of the Withlacoochee River near State Road 200.

The District has had to coordinate releases through this structure to provide the required flood control for the lakes’ residents but also to minimize impacts on the downstream subdivision already experiencing flooding from the Withlacoochee River.

Here’s What’s Cooking in the “Kitchen”