Conservation Is Always In Season 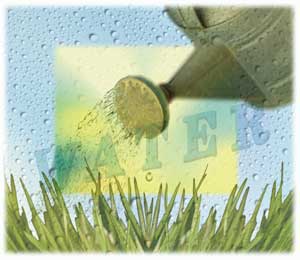 In west-central Florida, water conservation is always in season. That means some conservation measures are in effect year-round, whether it is the rainy season or the dry season.

The District began discussing possible updates to Rule 40D-22 (mandatory year-round conservation measures) in November 2001. District staff held five public workshops and consulted with District advisory committees. Staff also received input from outside experts, state agencies and other water management districts. Extensive discussions with local agencies on the year-round measures continued even after the draft Rule was approved in October 2002. As a result of these discussions, final updates to the Rule were published for adoption in July 2003. The adopted version went into effect Sept. 15 to help ensure that water conservation is a part of everyday life and not practiced only during a severe drought.

But what do year-round water conservation measures mean for the average consumer?

Most people will not experience any change. According to Lois Ann Sorensen, demand management coordinator, “The changes in the year-round rule basically just codify and clarify language in Board Orders that have been in place since 1992.”

A key component of the rule concerns lawn and landscape watering. Irrigation is not allowed between the hours of 10 a.m. and 4 p.m. This important “time of day” water conservation feature has not changed. The additional measures include a twice-per-week watering schedule that was carried over from the temporary Board Orders. Even addresses may water on Tuesdays and/or Saturdays and odd addresses may water on Wednesdays and/or Sundays. Other portions of the year-round rule apply to agriculture, golf courses and other irrigation water users.

“Check with your water utility or the District if you are not sure about the allowable watering times or days in your community,” advised Sorensen.

Here are some important features of the District’s standard year-round water conservation measures:

How does this relate to reclaimed water?

The use of 100 percent reclaimed water is not restricted by the revised year-round rule. However, any blend of reclaimed water with another source is now subject to the year-round water conservation measures or a similar watering schedule created by the community involved.

“As more people tap into this valuable alternative irrigation source, progressive communities will use schedules or rates to encourage efficient use of reclaimed water,” said Sorensen.

In addition to the year-round rule, the District will continue to require additional water conservation activities by industry, agriculture and golf courses, through the use of water use permits and best management practices.

Here’s What’s Cooking in the “Kitchen”