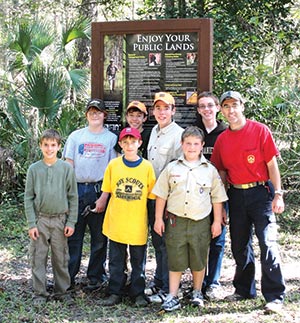 Torrential rains only added to the adventure for members of Boy Scout Troop 311 of San Antonio on their recent camping trip to the District’s Green Swamp Wilderness Preserve’s West Tract.

The troop set out on Friday, Sept. 11, for the property’s Cumpressco campsite.

“We were really happy with the site,” said Randy Emberg, Scoutmaster and District video production specialist supervisor. “It has a nice pavilion and a water source that, while not potable drinking water, can be used to extinguish campfires or for other chores.”

Emberg and the other troop leaders also like the fact that the property is close to home. Being able to camp “in their own backyard” means they can get to the site quicker so they can set up camp and spend more time enjoying the property.

“This summer we took the troop to a state park on the Santa Fe River,” said Emberg. “It was a fun trip, but it is a two-hour drive and cost much more because we had to pay for more gas, campsite reservations and canoe rental.”

Just over half of the troop attended this trip because most of the older Scouts are also involved in extracurricular school activities. Emberg says this was a great opportunity for the younger scouts to sharpen their camping skills so that down the road the whole troop can go on more extensive outings, like an overnight backpacking trip.

“The boys are really interested in going camping, hiking and fishing, so the District properties are perfect for us,” said Emberg. “It’s great to see the kids enthusiastic about getting outside, away from the TV and the video games.”

Despite heavy rain throughout the weekend, the Scouts were able to check out several of the hiking trails, fish in the Withlacoochee River, have campfires at night and hold a cookout competition on Saturday night. The troop was split into three groups and last place had to wash everyone’s dishes. They dined on a venison shepherd’s pie, tilapia ratatouille and fried chicken.

“The fried chicken, which is very hard to make in the woods, came in last,” said Anthony Andrade, one of the troop’s adult assistants and a District senior water conservation analyst.

Andrade, who is also a former Scoutmaster, and Emberg have been Scout leaders since their sons entered Cub Scouts about seven years ago.

“Being a Scout leader gives me the satisfaction of seeing my two boys and the other kids grow and mature and really become responsible adults,” said Andrade. “The boys elect their leaders and are responsible for planning their trips and activities. The older Scouts teach the younger boys about camping and surviving in the woods. We’re there for guidance, safety and to provide transportation.”

The troop has also camped on other District properties in the past, and Emberg says the boys always have a great time.

The weekend after their camping trip in the Green Swamp, the Scouts participated in the annual coastal cleanup by picking up trash on the Withlacoochee River near where they went fishing.

“It’s our way of giving back to the District for allowing us free access to such a great campsite,” said Emberg.

For more information on how you can obtain a free reservation for camping on District lands, visit the District’s web site at WaterMatters.org/recreation. 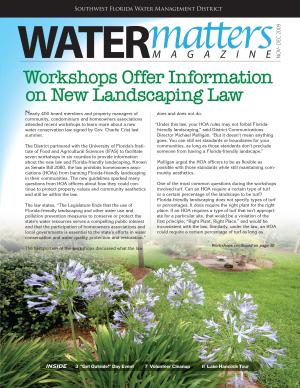