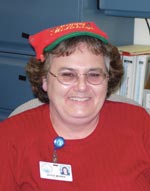 During the holiday season, Morra shows off her Christmas spirit.

In many ways, Joyce Morra, senior administrative assistant in the District’s Finance Department, serves as a translator or “go-between.” She’s someone who works with information, or finds out about a certain need, and relays the important details to those who need it or can do something about it.

For instance, as a member of the department’s budget section, Morra works closely with each department contact throughout the year as the finance staff develops the budgets for the District as a whole and each Basin Board.

“There are always deadlines and changes being made,” said Morra. “It’s a very involved process, so communication with the departments is key.”

Morra began working at the District in 1991 in the Brooksville Regulation Department. When a position became available in Finance, she applied for it because of her interest in finance. Growing up, Morra was raised in a family business, then worked in the human services industry before moving to Florida.

In addition to her duties in the budget section, Morra also plays a major role in the Employee Committee’s benevolent activities, particularly the holiday fundraising efforts.

Morra says being in frequent contact with employees from every department because of her role in the budget section helps her be more effective as a benevolent coordinator.

“We have the most generous people working at the District,” said Morra. “If you tell them about a need and ask for help, they will be there. My role is to do the asking.”

Morra’s tradition of community involvement did not begin when she started at the District; it dates back to her childhood.

“I was raised making up and delivering baskets to the needy,” said Morra. “My family was involved in our church and several community organizations like the United Way, the Elks, the American Red Cross and the Knights of Columbus, among others.”

Morra says her family still enlists her services from time to time. Her sister, who is a Red Cross volunteer in Morra’s native New Hampshire, asked her to help organize a welcome home celebration for the troops after Desert Storm. She agreed, of course.

“I was planning to go home for a visit that Fourth of July, so my sister had me making certificates and phone calls to help coordinate the event while I was still in Florida,” said Morra. “When I got there, I found out she didn’t have any military vehicles for the parade. I told her you can’t have a welcome home celebration without military vehicles, so I borrowed a car and drove to the local armory.”

The next thing you know, Morra had a convoy of troops and vehicles ready to take part in the parade. The celebration also included speeches by local dignitaries, food, music and fireworks.

“It was a blast, literally,” said Morra.

When asked what she does when she leaves the office she laughed, “Sometimes I crash.”

Someday Morra will retire from the District, although she’s not sure when. At that time, she doesn’t plan to sit back and relax. She has big plans involving real estate, farming and feeding the hungry.

“I’ve heard about projects that involve getting people to donate the use of their land to allow farmers to grow food to feed the less fortunate,” said Morra. “I’d like to work on doing something like that here. If we could network all these types of programs together, we wouldn’t have families going hungry.”v

Until then, you can find Morra in her office helping prepare the District’s budgets and making a difference through the District’s Employee Committee.

“Since my children are grown, I am fortunate to be able to focus on my very challenging job and be involved in a variety of benevolent activities here at the District and in the community,” said Morra.

Joyce Morra clearly enjoys her role as “go-between,” whether she’s relaying information to a department budget contact, connecting people with projects or learning about a need and finding a way to fulfill it.