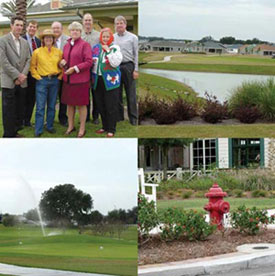 The District’s Withlacoochee River Basin Board held its December meeting at The Villages, a rapidly growing retirement community located in Sumter, Lake and Marion counties.

The growing community’s water needs and its efforts to increase efficiency, as well as plan for the future, are some of the reasons the Basin Board chose The Villages as its meeting site.

After the meeting, Board members and District staff toured the community, which includes residential, recreational and commercial property. Community planners expect to reach build-out by 2012. At that time, The Villages will encompass 22,308 acres and include 55,000 homes.

“The Board wanted to get a firsthand look at the water conservation measures being used in the community,” said Lou Kavouras, District executive coordinator. “Seeing the measures one reads about being put into practice makes it all come together.”

District staff works with communities like The Villages to incorporate water conservation measures, such as Florida-friendly landscaping, stormwater reuse and other alternative water sources, into their development plans.

“Because so many people are moving into the District, it is important to work with community planners and residents on new ways to minimize groundwater demand by helping them find ways to conserve water,” said Jerry Rice, Governing Board vice chair and Withlacoochee River Basin Board chair ex officio.

A key water conservation measure used at The Villages is utilizing reuse water from three wastewater plants to irrigate the common areas and golf courses.

“We do not use upper Floridan ground water to irrigate our golf courses,” said Trey Arnett, water resources engineer for The Villages. “We’re pretty proud of that. In fact we also have an agreement with the City of Wildwood to use their effluent for irrigation, as well as the effluent from The Villages.”

“Through regulation and water conservation, we can protect our water resources,” said Rice.

To learn more about the District’s water conservation efforts, visit WaterMatters.org and click on the Water Conservation link located on the right side.