Governing Board, Staff Tour a Variety of Projects Throughout Region 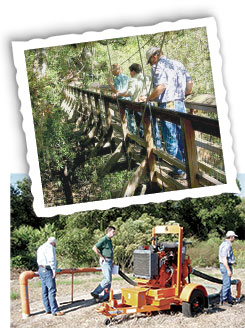 The first tour offered Board members an opportunity to visit a Facilitating Agricultural Resource Management Systems (FARMS) project and travel through a variety of public lands in the Myakka River watershed.

The first stop was at one of the District’s first FARMS projects — McClure Properties Ltd. in Myakka City, just down the road from Flatford Swamp. Board members had an opportunity to see one of 10 tailwater recovery sumps that help offset the farm’s groundwater use and reduce agricultural runoff into the swamp.

Next, the tour headed to Myakka River State Park where Board members met Diana Donaghy, the park’s biologist. After visiting the park’s popular canopy walkway and tower, Donaghy led the members on an extensive driving tour of the park, the District’s Myakka Prairie Tract and Sarasota County’s Carlton Reserve. The highlight of the tour was a drive through a dry prairie habitat, which is considered globally imperiled.

The tour was a great opportunity for newly appointed Peace River Basin Board Member Mac Martin to see firsthand how the District and its partners work together to purchase, manage and restore public lands in the watershed.

“I’m overwhelmed by the amount of programs and initiatives being managed and implemented by the District,” said Martin. “It’s clear that the District plays an invaluable role in protecting and preserving our precious ecosystems.” 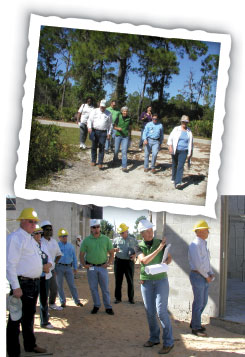 Board members toured the Lake Wales Ridge area to be briefed on District projects in the region.

The Lake Wales Ridge is a linear topographic feature running north-south through Polk and Highlands counties and is characterized by rare scrub habitats, sinkhole lakes and citrus groves. The combination of urban and agricultural land uses along with spectacular lakes and sensitive habitats poses a set of water management challenges unique to this area.

The District and the Peace River Basin Board have worked with the cities, counties and other cooperators to address these challenges and the trip highlighted some of these efforts. Four locations were visited by Peace River Basin Board members Pat Crisman, Mac Martin and Fred Trippensee, as well as Governing Board Chair Ron Oakley. The stops included a hydrologic restoration project at Highlands Hammock State Park, a stormwater retrofit project at Lake Clay, an educational exhibit and signage project at Archbold Biological Station and a FARMS project at the Turner Groves property. 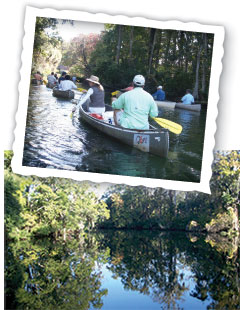 Two Governing Board members and nine Basin Board members toured the Chassahowitzka River to view one of the natural splendors of the District’s northern counties.

Staff members guided the tour and provided a brief overview of the land, its history and the environmental significance of an upcoming spring restoration project. The project will remove accumulated sediment, sand and debris from the spring’s main vent area and is expected to improve the river’s water quality.

While on the tour, participants encountered fish, birds, manatees, ducks, eagles, turtles, alligators and crabs. These animals will all benefit from a cleaner river.

“The preservation of this area is very important,” said Ron Oakley, Governing Board chair. “Cleaning up these springs will help protect them for future generations.” 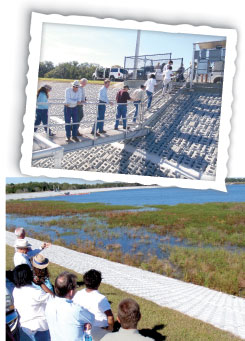 The last tour was of the recently restored Edward Medard Reservoir in eastern Hillsborough County. Operations staff showed the Board members the Medard Reservoir, including improvements to the dam face and remote control capability of the structure.

The District owns and operates the 770-acre reservoir, which provides flood control, groundwater recharge and recreation in Hillsborough County. The reservoir’s level is controlled by one of the District’s remote-operated structures. Operations staff can monitor and operate this structure using a laptop computer that has access to a phone line or the Internet.

District staff described the renovation project to the Board members, taking them on a tour of the rehabilitated interior face of the dam that uses articulated concrete block mats to prevent erosion. Under a previous cooperative funding project, the District helped fund the park’s new boat ramps, floating docks and parking area that provide boaters improved access to the reservoir.

“This is an impressive facility,” said Alan Grubman, a new member of the Withlacoochee River Basin Board. “The District’s ability to use technology to effectively manage these structures gives me a lot of confidence in the staff’s ability to address issues in our northern counties.”

The tours of these project sites gave Board members a chance to see the variety of goals the District is accomplishing through the projects they vote to fund.

“Board members can make more informed decisions when they see the results of these projects firsthand,” said Lou Kavouras, District deputy executive director for Outreach, Planning, Board Services & Ombudsman. “We were able to show them a broad cross section of the types of projects they will review during their terms.” 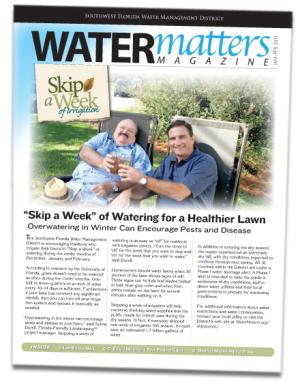 “Skip a Week” of Watering for a Healthier Lawn

Laboratory Ranks No. 1 in Review of Gulf State Peers

Employees Give Back to the Community

Governing Board, Staff Tour a Variety of Projects Throughout Region