District Board members and Pinellas County, Oldsmar and District staff were on hand as the city of Oldsmar broke ground on its reverse osmosis water treatment plant.

The plant, capable of producing two million gallons per day, is part of a $20 million project to provide the city with an alternative water supply. The brackish groundwater supply facility will help the city reduce its dependence on fresh groundwater currently purchased from Pinellas County and imported from Tampa Bay Water’s central wellfield system.

The city of Oldsmar is funding the project with the help of a $9.1 million grant from the District’s Pinellas-Anclote River Basin Board. The Basin Board is also assisting with a similar project in Tarpon Springs and a second reverse osmosis plant in Clearwater. The Oldsmar plant is on track to be the first brackish groundwater supply project built with cooperative funding from the District. 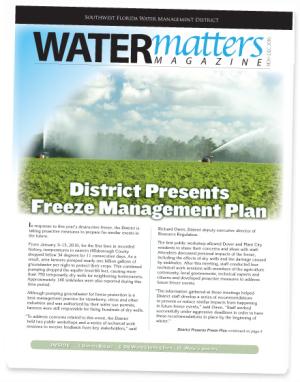