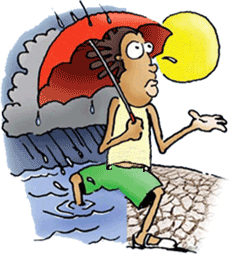 Do you know where your drinking water comes from? You might have poured it from a tap or bought it at the store, but it had to come from somewhere before that. Any guesses?

The ocean? That would be a good guess because the oceans contain most of earth’s water, about 97%! But would you drink a glass of seawater?

No! The salt would make you sick.

We need fresh water. Not just any fresh water though. Did you know most of the world’s fresh water is frozen solid? Nearly 80% is locked up in ice sheets and glaciers. We can’t drink that.

So where do you get your drinking water from? In Florida, lakes, rivers and swamps all contain water that isn’t frozen or too salty. So do ditches and retention ponds. But would you drink from the ditch near your house?

Why not? Because most of the world’s surface water might be polluted, so it could make you sick. Sometimes we treat this water to make it safe — with chemicals or filters or even ultraviolet light. But there’s a better way to get fresh, clean water. This hidden place is where most people in the world get their drinking water.

Where is this mystery place?

It’s water that’s hidden below our feet. Some rainwater seeps into the ground. This GROUNDWATER becomes part of an AQUIFER, which is an underground water supply. Water in an aquifer is usually cleaner than surface water, especially if it’s deep or has been underground a long time.

Sometimes it comes to the surface in SPRINGS, but most people get it by digging holes called WELLS. We put pipes in the holes and pump up the good water. So the water you drink every day probably comes from under the ground — the hidden part of the water cycle.