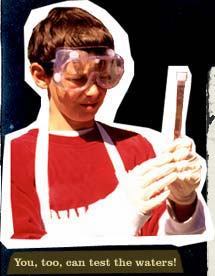 Both the United States government and Florida have adopted water quality goals and standards. Each water body has its own standards. For example, water used for drinking has to be much cleaner than water used for crop irrigation or to cool machinery in a factory. Scientists use information from water monitoring to determine how a water body rates based on its intended use. If scientists rate water quality as GOOD, then the water can fully support its intended uses. If, however, scientists rate the water quality as IMPAIRED, the water cannot support one or more of its intended uses. Shown at left are three pie charts comparing the quality of various water bodies. On average, about 45 percent of tested water bodies are rated as impaired.

Why do you think rivers and streams tend to be less impaired than lakes and estuaries? Water is constantly moving through rivers and streams, while lakes are areas where water collects and is stored for long periods of time. As a result, pollutants that make their way into lakes have no way of getting out.

Estuaries (a semi-enclosed body of water where fresh and salt water mix) have the highest rate of impairment. Major rivers that empty into the ocean create these estuarine habitats. Pollution can travel from hundreds of miles upstream and empty directly into the estuary.

Take a look at Tampa Bay, Florida’s largest estuary. Can you see how many rivers empty into this estuary? Look how far inland they run. Pollution can travel from many different areas of Florida and end up in the bay. Do you have an estuary near your home? If not, perhaps you live near a river that drains into an estuary. Now you can understand a little more the importance of maintaining clean waterways across your entire watershed (a watershed is an area of land that water flows across as it moves toward a common body of water, such as a stream, river, lake or coast).

You may also have noticed that the pie charts are labeled as "assessed" rivers, lakes and estuaries. It would take a lot more money, technology and time than we currently have available to test all water bodies in the United States. Our country contains more than 3,600,000 miles of rivers and streams alone! Placed end-to-end, these water bodies could wrap around the entire earth 144 times. Only a percent of our nation’s water bodies have been assessed: 19% of rivers and streams; 43% of lakes, ponds and reservoirs; 36% of estuaries; 6% of ocean shoreline; and 92% of Great Lakes shoreline.

It is important to remember that you cannot tell very much about the quality of water simply by looking at it. Most pollutants are invisible to the naked eye. There are three major types of pollutants that affect water quality. Let’s take a look at each type.

Dirt
Rain can wash dirt into rivers and streams. The dirt can smother tiny organisms and kill fish eggs clinging to rocks on the riverbed. Dirt can also clog gills and suffocate fish. Too much dirt in a water body can block sunlight that plants use to grow and make food in a process called photosynthesis. If plants don’t get sunlight to grow, not only do the plants die, but they also don’t make oxygen that other organisms, such as fish, need to live.

Bacteria
Not all bacteria are harmful. However, some bacteria are pathogenic, meaning they can cause disease in humans. If we find certain bacteria living in a body of water, this can indicate that the water might harbor bacteria and viruses that can make you sick.

Nutrients
This is the primary cause of water pollution. The primary pollutants in this category are nitrogen and phosphorus, but there are many others. This type of pollution has impaired more than 3.8 million acres of lakes, ponds and reservoirs nationwide! Excess nutrients cause algae to grow out of control and use all the available oxygen in water, killing off other organisms that need oxygen to live. The excessive growth can also block sunlight and cause the death of plants and other aquatic organisms.