Atop Hillsborough County’s newest “mountain,” visitors got a glimpse of the largest coastal restoration project ever performed for Tampa Bay. 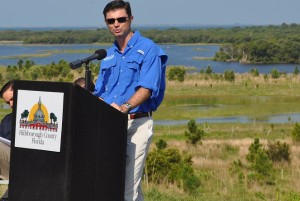 Since 2009, staff has been designing and constructing the project. It involved restoring 1,043 acres of land including 645 acres of uplands, such as pine flatwoods and hardwood hammocks, and 398 acres of various estuarine and freshwater habitats. Also, nearly one million plants were installed with the help of about 1,500 volunteers at 25 different events. The project also meant moving 1.6 million cubic yards of dirt, used in two observation mounds nicknamed Mount Rock Ponds East and West. 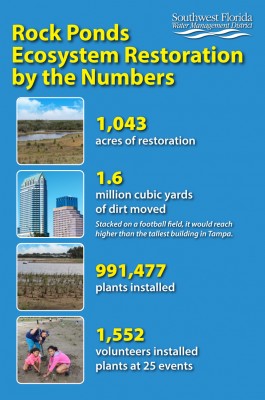 Restoration of these communities will help offset habitat losses suffered throughout Tampa Bay and will prove valuable for the public and the thousands of coastal species that live within the Tampa Bay ecosystem.

“They are a world-class group of scientists,” he said. “The District is incredibly proud of the tireless hours they invest into protecting the water resources.”

With arms open wide, Henningsen gleefully welcomed the crowd of 85 people to take in the completed project.

“This project is an amazing example of cooperation,” he said. “We had 33 entities that worked on this project and 26 of those were unpaid.” 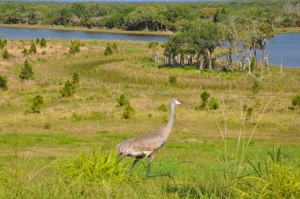 The dedication concluded with the release of several rehabilitated birds including a Sandhill crane and Caracara.

This project is a cooperative effort between the District’s Surface Water Improvement and Management program and the Hillsborough County Conservation and Environmental Lands Management Department.

For more information on the project, visit the Rock Ponds webpage.