Two weeks ago, Spring Hill resident Beverly Patton went to the Weeki Wachee Preserve to rest and read her Bible, but the August afternoon sun soon started to wear on her. 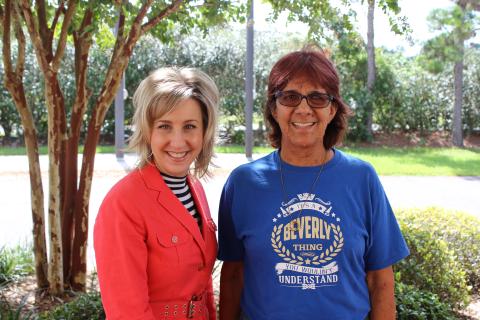 “I walked in and I was fine,” she said. “I got dehydrated and almost passed out.”

That’s when she called the District. She saw the number on a sign-in sheet at the preserve. “I didn’t want to dial 911 because I didn’t have the money for an ambulance,” she said.

Brooksville receptionist Cindy Taylor took the call. “She was ill and feeling faint,” Taylor said. She remained on the line with Patton while Lori Manuel, administrative coordinator, called the police.

“I happened to be at the switchboard when Cindy received a panicked call from Ms. Beverly Patton who was visiting one of our properties,” Manuel said. “She was having difficulty breathing and it sounded as if she was suffering from heat exhaustion. I used the lobby phone to call 911 while Cindy asked Ms. Patton the necessary questions and I relayed Ms. Patton’s answers to the 911 dispatcher.”

Taylor continued to check on Patton until help arrived. “I stayed on the phone until I heard sirens,” she said.
Patton was taken to the hospital and given fluids for dehydration. She was released four hours later.