Imagine the excitement of boarding an airplane with 15 of your closest friends to jump out at 1,500 feet with only the wind in your face. For Senior Environmental Scientist Jeff Whealton, this is a regular occurrence as a member of the Phantom Airborne Brigade.

Since 2015, Jeff has been part of the Zephyrhills-based veterans' organization that conducts static line airborne operations. They organize reunion jumps for Airborne- qualified veterans from all branches of the armed forces, including foreign militaries. The group also performs at air shows and other special events around the state. Jumps are conducted using military equipment and procedures. 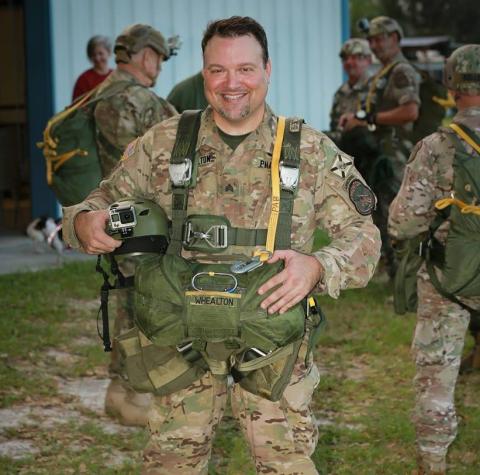 Jeff served in the Army from 1990-1994 and with the Florida National Guard from 1994-1998. Jeff earned his Jump Wings at the Army's jump school and went on to serve as a paratrooper with the 82nd Airborne Division.

Jeff has a total of 56 jumps to date, 46 of those with the Phantom Airborne Brigade. Recently, Phantom performed at the TICO Warbird Air Show in Titusville.

"I am proud to be part of Phantom," said Jeff. "The challenge is exciting, the adrenaline rush is addictive, but the comradery among my military brothers is probably what I enjoy most about being part of the group."

Thanks to his military service, Jeff used the GI Bill to pay for his Environmental Science and Policy degree from the University of South Florida. Jeff works in Regulation and is part of the Ag team that handles agricultural permitting, exemptions, and complaints. He manages the soil scientist contract, the NRCS Mobile Irrigation Lab, and the Center Pivot Mobile Irrigation Lab. Visit the Phantom Airborne Brigade's website to learn more about the organization.