The District will hold a series of hog hunts on District lands throughout the year to help reduce the wild hog population. Registration for Phase 2 Hog Hunts starts 9 a.m. Monday.

Wild hogs, which are not native to Florida, feed on roots, tubors and grubs by rooting with their broad snouts and can leave an area looking like a plowed field. They also prey on native wildlife, compete with native species for food and transmit diseases to other wildlife, livestock and humans. Additionally, hogs may facilitate the spread of exotic plant species by transporting seeds and/or providing germination sites through rooting. 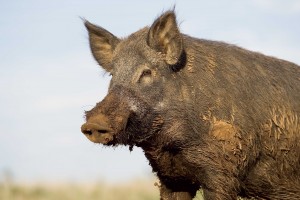 The District is using a three-phase hunting system to alleviate and decrease these impacts.

“The three phases are designed to encourage attendance and maximize the effectiveness of the event,” said Will VanGelder, the District’s Land Management Supervisor.

The District allows hogs to be controlled through hunts when the damage they cause is at unacceptable levels. Damage from hogs is occurring more frequently and with increasing severity.

Phase 2 Hunts
• Registration will occur 9 a.m. on Dec. 21, 2015.
• Includes six hunts that occur January and February 2016.
• Permits are transferable.
• Top two producers on each hunt of Phase 2 will be placed on the District’s “top producer” list and will be contacted between March and October 2016 to take part in feral hog management hunts on an as-needed basis, free of charge.

Prospective hunters can purchase permits for Phase I hunts beginning 9 a.m. Oct. 12 on the District’s hoghunts. Permits will be available on a first-come, first-served basis until they are sold out. The cost is $75 for each permit.

A complete list of hunts, with locations and dates, is available at hoghunts. In addition, the site provides maps of the properties and rules of the hunt.

This is the seventh consecutive year for the hunts. Last year’s hunts removed 580 hogs during 22 hunts on 10 different tracts of land throughout the District.