Rainfall Patterns Expected to Change in 2017

A change in the global weather pattern in 2016 meant residents also saw a change in rainfall patterns. Most areas of the District saw above-average rainfall in the first part of the year caused by a mild El Nino. But the development of a La Nina cycle caused drier-than-normal conditions the second half of the year.

The La Nina event is expected to dissipate by February, and climatic conditions are expected to turn to neutral conditions. That means rainfall patterns aren’t as predictable as those of 2016, according to Granville Kinsman, the District’s hydrologic data manager. 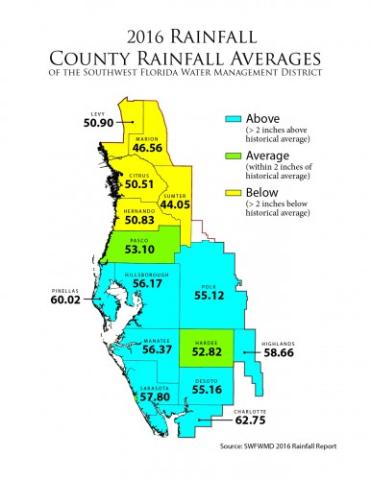 Two new data viewers also are available for rainfall data at WaterMatters.org/Data/Hydrologic. The Last Recorded Value App shows the most recent water level or rainfall value for data collection sites. The Near-Real-Time App shows the current water levels and rainfall with updates every half hour. Both of these data viewers now show the data directly on maps allowing residents to search for areas near them and in real time.