Public Affairs Staff Take on Leadership Roles Across the State

Several staff members in the Public Affairs Bureau (PAB) are using the leadership skills they’ve built at the District to now direct public relations professionals across the state.

Three PAB employees have recently been elected to lead public relations organizations. Terri Behling, External Affairs manager, has been serving as the state President of the Florida Public Relations Association (FPRA) since August. Tara Poulton, Government Affairs Program manager, is serving as the president-elect of the Central West Coast Chapter of FPRA. And Mary Margaret Hull, lead communications coordinator, was recently elected president-elect of the Tampa Bay chapter of the Public Relations Society of America (PRSA).

Behling said her roles at FPRA helped build leadership skills that carry over into her District job. 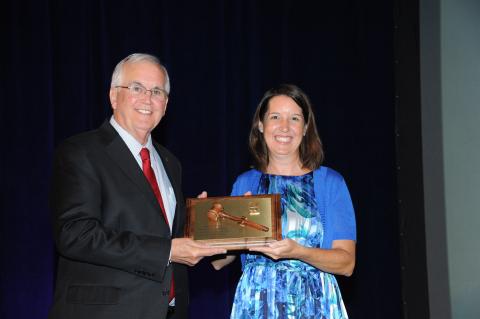 “Leading a team of volunteers is not easy, you need good communications skills, organizational skills and be willing to complete tasks when someone doesn’t fulfill their responsibilities,” she said.

Behling said her involvement with FPRA also benefits the District.

“Serving in these roles also gives the District exposure not only within our 16 counties, but across the state,” she said.
“I have been able to bounce ideas off other government public relations professionals and seek advice from senior-level practitioners. FPRA also provides opportunity for us to recruit top-notch communications and public relations professionals for District positions.”

Hull agreed that her leadership role at PRSA helps the image of the District.

Poulton said she looks forward to leading her chapter.

“I saw this as a growth opportunity for myself and an opportunity for experiences that I can bring back to my job,” Poulton said. “It’s important to continue learning and challenging yourself.”