Habitats are thriving at MacDill Air Force Base in Tampa thanks to a District project aimed at restoring natural systems and improving water quality for Tampa Bay. 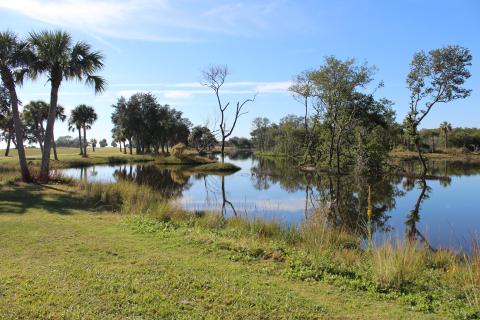 District staff completed the third and final phase of a restoration project at MacDill last fall, along the southern tip of Tampa’s Interbay Peninsula near the base’s golf course.

Gone are the exotic Brazilian peppers. Newly planted marsh grasses are flourishing and mangroves are returning to the sites. Snook and blue crabs have been spotted.

“We are thrilled at how quickly everything seemed to thrive here,” said Nancy Norton, project manager. 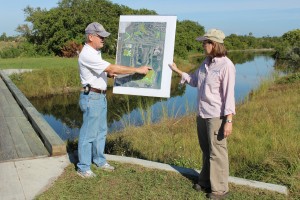 The project is part of the District’s Surface Water Improvement and Management (SWIM) Program and was possible through a partnership with the U.S. Air Force.

SWIM has restored 178 acres at MacDill during the past 20 years. The first two phases of the projects were completed in the 1990s, but the final phase was put on hold after Sept. 11, 2001 when security was heightened at all U.S. military bases.

District scientists resumed the last phase of the project in July 2012, which involved 110 acres and cost about $2.25 million. MacDill officials went out of their way to accommodate District staff and the construction contractor during the project, closing the golf course on certain days so staff could complete project work.

The project received an environmental award through the National Military Fish and Wildlife Association in the category of Conservation Partnership.