For Zakk Simpkins, a tradesworker in the Operations & Land Management Bureau, life hasn’t been easy.

He grew up in a rough neighborhood in Lake Panasoffkee, FL and was abandoned by his dad at a young age. At 7, Simpkins spent a short time in foster care where he was abused by his caretakers. But it wasn’t until Mother’s Day 2011 when things went from bad to worse. That day, his mom died after an extended illness, leaving him orphaned and homeless at 14 years old. 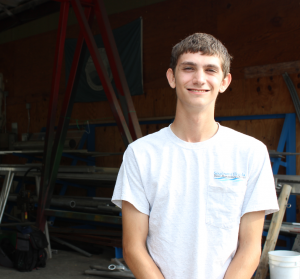 “I jumped between friends’ houses,” Simpkins said. “I was criticized at school for wearing baggy clothes. I would go months without showers.”

He had frequent run-ins with police for sleeping in public areas and behind stores. And for a while, Simpkins would find his meals in garbage cans. “I was more focused on surviving than anything,” he said.

Determined to keep a promise made to his mom that he would finish high school, Simpkins did just that and also went on to complete a welding program at Withlacoochee Technical College. He was one of only four students accepted into the program. There, he met an instructor who told him about the United Way of Citrus County Prosperity Center which helps people dealing with financial hardships.

“I had a lot of help the entire way,” Simpkins said. “Thankfully there are a lot of angels in this world.”

The United Way found him a paid internship at Titan Contracting in Homosassa where he worked as a welder. He was able to make a down payment on a car and move into an apartment. Soon, a reporter at Bay News 9 called to interview Simpkins. That’s when Ken Frink, Operations, Lands & Resource Monitoring director, first heard Simpkins’ story.

“I was out on back surgery and in bed watching Bay News 9 when I saw the feature,” said Frink.

Impressed by Simpkins, Frink tracked down the reporter and got in contact with Titan. He offered Simpkins an interview for an open tradesworker position. “He had an outstanding interview. His ambition and drive were absolutely amazing,” Frink said.

Today, Simpkins is learning the ropes from his teammates at the Brooksville Office. “It’s a hard job,” he said, “but I like challenges.”

He and his longtime girlfriend Maribel are looking forward to the future – they’re expecting a baby this December. “I’m not going to let my past define me,” Simpkins said. “As hard as my life was, somebody’s had it worse.”