Governor Appoints Dunbar to Governing Board

David W. Dunbar recently was appointed to the District’s Governing Board by Gov. Rick Scott.

Dunbar, of Palm Harbor, is a commercial banker and chairman of Synovus Bank of Florida. He was appointed to succeed Jennifer Closshey and his term ends March 1, 2017. The Governing Board position represents both Pinellas and Hillsborough counties. 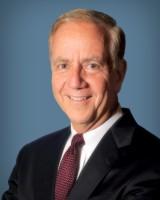 The 61-year-old describes himself as an avid coastal fisherman with an understanding of water issues and the impact on the ecosystem.

Dunbar currently serves as a Board of Trustee for Tampa’s Lowry Park Zoo and as a board member of the Homeless Emergency Project in Clearwater. He received his bachelor’s degree in finance from Florida State University.

Governing Board members are unpaid, citizen volunteers who are appointed by the governor and confirmed by the Florida Senate. The Governing Board sets policy for the District, whose mission is to manage the water and related resources of west-central Florida to meet the needs of current and future water users while protecting the environment.