A District staff member was recently recognized for his quick thinking when assisting a citizen, possibly saving a life. 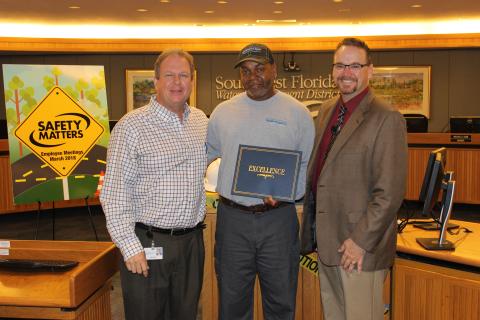 Saxton was leaving the Green Swamp Wilderness Preserve, when he spotted a man who had a flat tire on Highway 471, east of Dade City. Due to spotty cellular service, the man couldn’t get in touch with AAA, so he proceeded to change the tire himself in 90-degree weather.

Saxton noticed the man needed attention because he had no water and was close to passing out. Saxton immediately assessed the situation, got the man some water and poured it over rags to cool him off. Once the man was situated, Alan was able to get cellular service and contacted AAA as well as the man’s wife and waited until assistance arrived.

The man later called the District to express his gratitude to Saxton for saving his life, saying “if Alan hadn’t shown up, I would have never made it home.”

Saxton was one of 14 employees to win awards in March for a variety of successes including promoting water conservation and coordinating the District’s response to Hurricane Irma.