The competition is a problem-solving, natural resources education program for high school students allowing them to use critical-thinking skills to solve problems or conduct hands-on investigations about current environmental issues.

This marked the 19th year the District sponsored the program, providing staff volunteers, water testing kits and nearly $3,000 in funding to offset the cost of transporting students to the competitions. 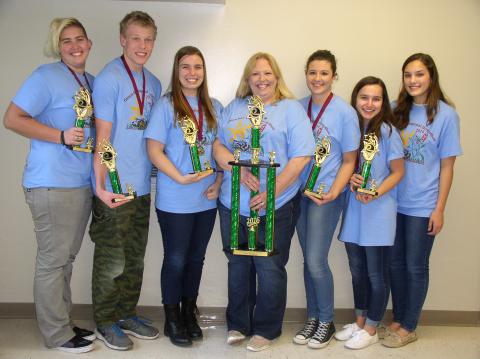 Kris Stair, staff scientific data analyst, represented the District at the Tampa Bay Regional Envirothon, hosted by Nature’s Classroom. Stair was a judge for the Aquatics portion of the contest.

“I heard a story once from a participating teacher that a student changed their major and began studying environmental science when they enrolled in college because they had enjoyed their experiences through the Tampa Bay Regional Envirothon,” Stair said. “I am thrilled to have played a small role by being part of the team involved in making it become a successful program or event.”

“We participate in the Nature Coast Envirothon every year, covering what is called the ‘Special Topic,’” Gargano said. “Our group of participants has to read the reference materials provided to the students and essentially learn a new topic for every event. Once we have studied the topic, we create a test to administer during the competition.”

This year’s topic was invasive species.