Sometimes someone’s trash can be a treasure.

Members of the District’s Springs Team came up winners by finding an orange couch cushion while participating in a cleanup Saturday at the Rainbow River. About 175 volunteers participated in the event.

The “cushion catch” earned the Springs Team the award of “Most Colorful Item.” Recognized as the “largest item” was an eight-foot-long wooden plank with large nails sticking out. Some of the other items collected were a cell phone, t-shirts, hats, cans and bottles, and fishing supplies including fishing line, which is harmful to wildlife. 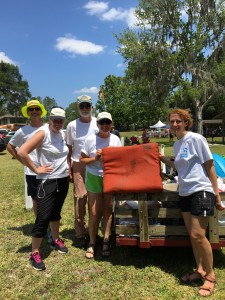 Sky Notestein, springs expert and member of the District’s Springs Team, said “it’s good to see so many members of the community out here helping keep the Rainbow River clear of trash.” Danielle Rogers, another Springs Team member echoed those sentiments saying “they were a great group of volunteers.”

Participants gathered at Rio Vista Beach Park north of Dunnellon and then dispersed in boats, kayaks, canoes and paddleboards along a 5-mile stretch of the river starting at Rainbow Springs and ending just south of the Withlacoochee River. Some even took part by snorkeling or scuba diving in the 72-degree water.

The Rainbow River Conservation, Inc. has coordinated this cleanup event since the early 1980s and says there is less trash on the river now than in past years. The volunteer members of the conservation work tirelessly to preserve the Rainbow River. It is one of the many organizations helping protect our local spring systems.

To learn how to get involved in the community effort to restore our springs or to see what the District is doing to help the major springs in our region, visit WaterMatters.org/Springs.