As the powerful blast of water rocketed across the mound, the large pile of dirt covered with invasive plants disappeared within a matter of minutes.

The District has turned water into a power tool to help restore wetlands and improve water quality as part of the ongoing Feather Sound Tidal Wetland Restoration Project. District contractors used specialized fire hoses to hydroblast spoil mounds, which were created in the mid-1900s when ditches were dug along the coast to provide mosquito control. The dirt piles produced by these activities have since become perfect growing areas for invasive plants. 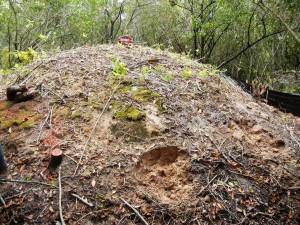 The hydroblasting is part of the first phase of the project, which is located in the Roosevelt Creek watershed and drains to Old Tampa Bay. The watershed encompasses a 13-square mile area and is surrounded by urban and residential areas that produce stormwater runoff.

The project is led by the District’s Surface Water Improvement and Management (SWIM) Program. The goal is to restore and enhance about 640 acres of intertidal wetland and upland habitat along the west side of Old Tampa Bay by modifying existing ditches and removing exotic vegetation. This is just one of many SWIM projects aimed at reducing the pollutants entering Old Tampa Bay and improving water quality.

Stephanie Powers, a staff environmental scientist, said the District uses hydroblasting because it causes the least amount of damage to the surrounding land.

“Using this technique, we don’t need to bring in large earthmoving equipment that could damage sensitive areas,” she said. 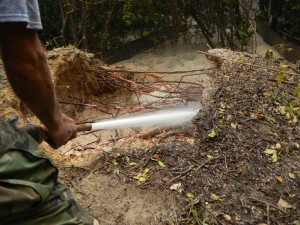 Water from the existing ditches is pumped out between 120 and 200 gallons per minute to blast away the spoil mounds. The soil is directed into selected areas to create small dams within the ditches that reroute the flow of stormwater runoff through the system. The new route will force the runoff on a longer path, allowing for increased removal of sediments and nitrogen before flowing into the bay. In total, the District created 14 new ditch blocks by removing mounds.

The District is working with the Tampa Bay Estuary Program and Pinellas County on the project. For a future project phase, the restoration team has created an enhancement plan for the treatment of reclaimed water and stormwater runoff discharging from a nearby golf course. The owner has partnered to improve water quality by removing nearly 5 acres of turf from the course and replacing it with native Florida plant species. Additional changes proposed for the shoreline within the course’s water features, along with a more aggressive turf removal plan, would further decrease nitrogen input from fertilizers.