District Reports Largest Amount of Seagrass in Tampa Bay since the 1950s. 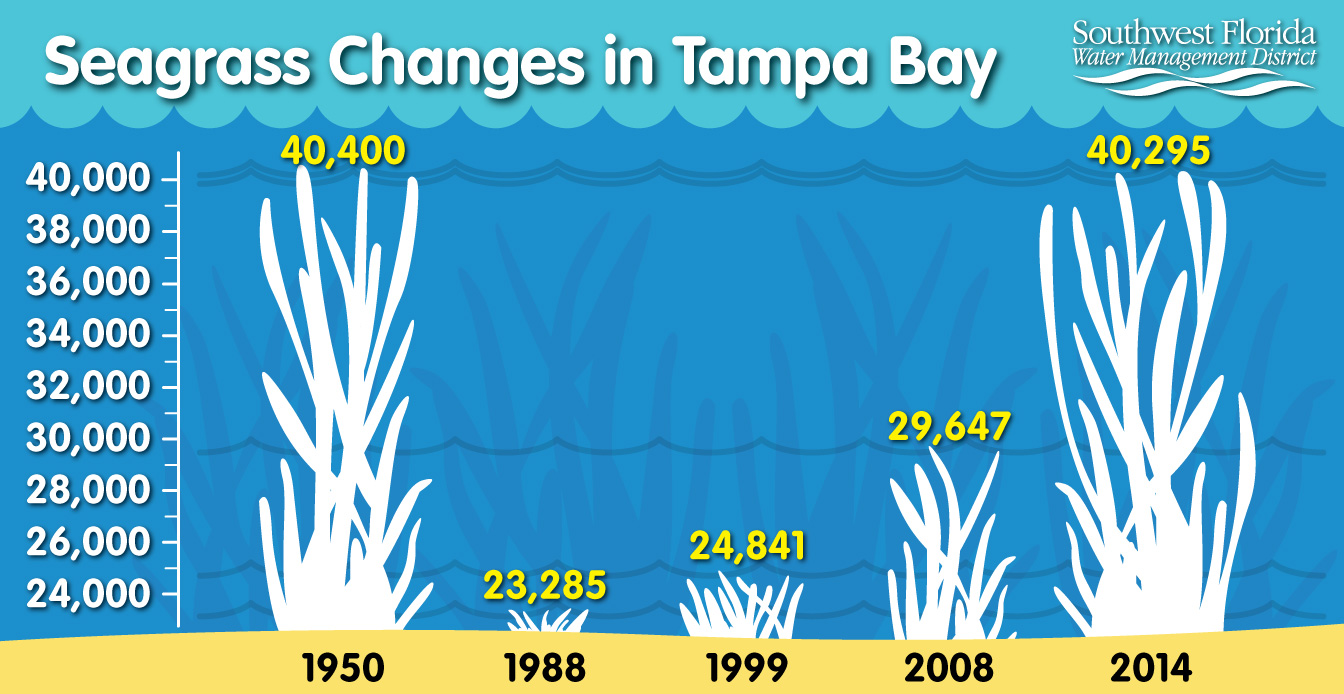 Tampa Bay has the largest amount of seagrass measured in more than 60 years, an indication the health of one of Tampa’s major water bodies continues to improve.

Scientists with the District’s Surface Water Improvement and Management, or SWIM program, released the results of their 2014 seagrass mapping study showing Tampa Bay now supports 40,295 acres of seagrass beds. Those are levels not seen in Tampa Bay since the 1950s.

This increase in seagrass has now surpassed the recovery goal of 38,000 acres bay wide, set 23 years ago by the Tampa Bay Estuary Program.

By the 1970s, coastal development and pollution caused by humans had significantly affected Tampa Bay seagrass, said Kris Kaufman, a senior environmental scientist for the District. By 1988, the amount of seagrass beds had dropped to 23,285 acres.

“Seagrass was our canary in the coal mine,” Kaufman said. “Major losses occurred when Tampa Bay was in distress. Now with sustained good water quality in the Bay, seagrasses are flourishing.”

A community-wide effort that began in the 1990s to reduce nutrient pollution to the bay is thought to be a major contributing factor of the seagrass recovery. Approximately $150 million has been spent by the District and cooperating partners on stormwater improvement projects during the past 25 years.

The District’s maps are used as a tool for measuring and tracking biological integrity of estuaries as it relates to water quality conditions. Seagrass generally grows in waters less than 6 feet deep, but in the clear waters around Egmont and Anclote Keys it can be found in water 10 feet deep or more.

The District began its formal seagrass mapping program in 1988. As part of the program, SWIM scientists assess seagrass in five Gulf coast estuaries, spanning the five coastal counties of Pinellas, Hillsborough, Manatee, Sarasota and Charlotte. Every two years maps are produced from aerial photographs and then verified for accuracy by conducting field surveys. The results are used to track trends in seagrass and to evaluate ongoing water quality improvement efforts. Map results for the other four estuaries will be available later this year.