Pinellas County waters saw an overall increase of 150 acres in seagrass coverage, according to recently released results from the District’s 2014 seagrass mapping study. 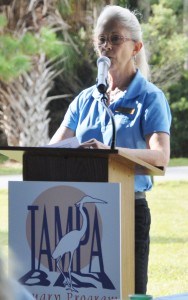 Documenting the extent of seagrass and how it changes overtime is a valuable tool for scientists throughout Florida. Seagrasses are an important barometer of a bay’s health because they require relatively clean water to flourish, thus they are sensitive to changes in water clarity and quality.

The District recently joined the Tampa Bay Estuary Program in celebrating the increases seen in Tampa Bay. The water body now supports 40,295 acres of seagrass beds. Those are levels not seen in Tampa Bay since the 1950s.
Governing Board member Wendy Griffin congratulated the public/private partnership that made the seagrass program successful. She noted healthy water ways translate into a healthy economy.

The District began its formal seagrass mapping program in 1988. As part of the program, Surface Water Improvement and Management (SWIM) scientists assess seagrass in five gulf coast estuaries. Every two years, maps are produced from aerial photographs and then verified for accuracy by conducting field surveys. The results are used to track trends in seagrass and to evaluate ongoing water quality improvement efforts.