The District purchased a significant portion of the eastern bank of the Rainbow River and the Governing Board approved this contract at the March meeting. 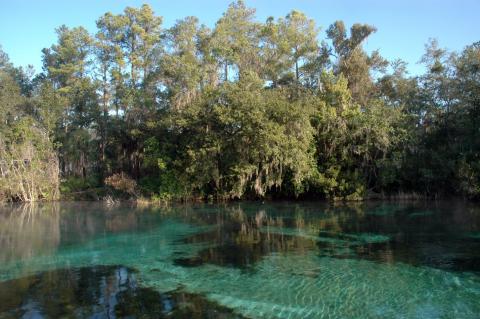 The proposed acquisition consists of about 16 percent of the eastern bank of the Rainbow River. Coupled with existing public ownership, the acquisition advances the District’s mission of protecting this important natural resource.

Rainbow Springs is the largest first magnitude spring in Florida, which feeds the Rainbow River and flows for approximately 5.7 miles until it merges into the Withlacoochee River. With its shoreline of marshes, wetlands and giant bald cypress trees, this is one of the last major undeveloped properties along this natural river corridor.

“This was an acquisition that has been worked on by several agencies to acquire and protect that land,” Sanders said. “The fact that we were able to negotiate an agreement with the landowner really identifies how important conservation is to both parties.”

Acquired lands also are open for public recreation such as hiking, canoeing, bird watching, fishing and camping. As such, the District will work cooperatively with the Florida Department of Environmental Protection Florida Park Service to develop an agreement to manage the the park as part of the adjoining Rainbow Springs State Park.