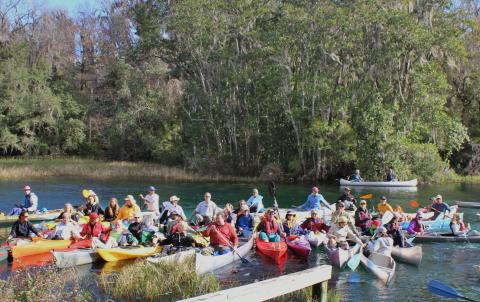 Dozens of paddlers recently joined the Florida Wildlife Corridor Expedition team on their excursion along the Rainbow River.

The District recently hosted the Rainbow River Paddle trail mixer in partnership with the expedition at Rainbow Springs State Park. Despite some chilly temperatures, more than 50 people came out to paddle in the event.

Before people launched their canoes and kayaks, they had a chance to meet the expedition team and some of the District’s Spring Team members. Chris Anastasiou, Springs Team leader, explained the District’s restoration efforts at Rainbow and other area springs. Sky Notestein, springs team member, answered questions about the ecology and health of the river while paddling with the group.

The Florida Wildlife Corridor Expedition, which began Jan. 10, is a team of people traveling across the state 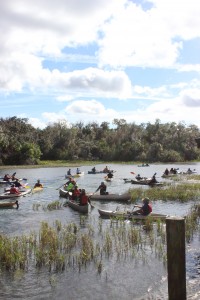 to help raise awareness and generate support for connecting natural lands and waters through Florida. The exploration team will walk, paddle or bike their way through more than 700 miles from the Everglades Headwaters in Central Florida, through the District, up to and across the Panhandle to the Alabama border.