Through the crystal waters of the Chassahowitzka, guests could spot schools of fish swimming near the spring vent and even a young manatee swimming nearby.

The wildlife at the beloved Citrus County waterway are benefitting from the first phase of the Chassahowitzka Springs Restoration Project.

About 120 people attended a dedication last week for the project including state and District leaders, Governing Board members, elected officials and residents.

The effort, led by senior environmental scientist Philip Rhinesmith, removed sediments with a pump that had accumulated in the springs. Sand and organic matter made their way to the bottom of the springs from upstream residential canals and stormwater runoff. These sediments had a negative effect on water clarity and quality and reduced the ability for aquatic plants to flourish in the springs.

The area is now 2 to 4 feet deeper and approximately 500 pounds of phosphorous and 7,600 pounds of nitrogen were removed.

Florida Department of Environmental Protection Sec. Herschel Vinyard said during the dedication that the project is an example of how the District not just studies water quality, but leads projects to restore it.

“A project like this scratches one of my itches,” he said. “This is not just an improvement for us but for the critters we share the springs with.” 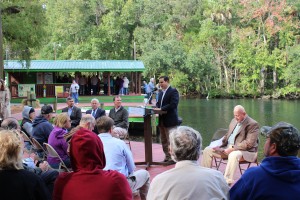 In addition to removing sediments 24 feet down into the spring vent, significant historical artifacts were recovered. A certified archaeologist surveyed and monitored the sediment and found items dating back as far as 12,000 years.

Some of the significant items found include 16th century Spanish pottery, Native American tools and paddles, and a 2,000-year-old Native American bowl, the only one of its kind ever found intact in Florida.

Executive Director Robert Beltran reminded the guests that it was going to take time to restore the springs and that the District can’t do it alone.

“Together, I believe we can truly make a difference to preserve and protect these natural treasures,” he said.