A furry feline recently returned to District property after getting injured in a wire fence. 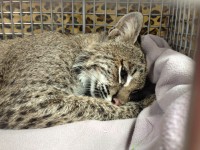 The District welcomed the release of a young male bobcat at Cypress Creek Preserve in Land O’ Lakes. The bobcat was returned to the property where he was found after getting entangled in a wire fence that bordered the property.

A nearby resident spotted the feline caught in the fence and contacted Big Cat Rescue in Tampa. The nonprofit animal sanctuary is devoted to rescuing wild cats.

Big Cat Rescue staff sedated the bobcat and untangled him from the fence. They transported him to Animal Coalition of Tampa where they removed a piece of metal stuck in his paw.

After the bobcat recovered, he was ready to return home.

“His best chance for survival is where he came from and that was on your land,” said Carole Baskin, CEO of Big Cat Rescue.

The bobcat was released at Cypress Creek Preserve in October. To watch a video with more details about the rescue, click here.